The Company issued a total amount of NIS 300 million par-value ($82.6 million) of the New Debentures in the Offering, bearing interest at a fixed annual rate of 2.29%, paid out on a semi-annual basis, at a price per debenture unit (each unit comprised of NIS 1,000 par value of debentures) of NIS 1,000. The principal amount of the Series C Debentures will be payable by Formula in seven annual installments from December 1, 2020 through December 1, 2026, the first five of which will each constitute 11% of the principal, and the final two of which will each constitute 22.5% of the principal.

Commenting on the results, Guy Bernstein, CEO of Formula Systems, said, “We are very pleased with our strong start to 2019, demonstrating our continued impressive momentum from previous year recorded in the first quarter across our entire investment portfolio.”

"Matrix delivered all-time record financial results for the first quarter of 2019 with record results in all parameters, including revenues of NIS 851.9 million (approximately $233.8 million), operating income of NIS 60.1 million (approximately $16.5 million), net income of 36.7 million (approximately $10.1 million) and EBITDA of about NIS 90 million (approximately $25.2 million). Such results are attributable to Matrix growth recorded both in Israel and in the US, organically and through acquisitions. Matrix is focused on keeping with its successful strategy of completing strategic acquisitions (such as in the case of its latest acquisition of Medatech, an integrator of Priority ERP system), executing complex ‘Mega-projects’ (such as in the case of the establishment of Israel’s national credit database for the Bank of Israel which was completed and launched at the beginning of 2019 and considered to be the largest computerization project carried out in Israel’s civil sector) and focusing on the US market”.

“Sapiens continued its momentum from 2018 with top line growth and increased profitability recorded during the first quarter of 2019. Sapiens revenues’ growth was mainly driven by acceleration in Sapiens’ North-American segment, specifically the strong wins in the P&C business. Sapiens’ primary growth drivers for 2019 are continued expansion in the P&C segment, a stable L&A segment and increase of cross-sales for its current customer base, all are expected to enable Sapiens to deliver its 2019 full-year guidance (non-GAAP[1] revenues between $318 million and $323 million and non-GAAP operating margins between 15.2% and 15.6%).”

“Magic Software continued its strong momentum from 2018, reporting a strong start to 2019. Magic Software adheres to its market positioning and strong strategy, aspires to enrich its product offering with new, powerful and innovative technologies. A notable milestone during the first quarter of 2019 was the acquisition of PowWow SmartUX™, a leading low-code development platform for mobilizing and modernizing enterprise apps. SmartUX™ is strongly synergetic to Magic’s low-code existing solutions, and by bringing them together, Magic is able to offer to new and existing clients stronger solutions and services that are well-tuned for today’s high demand for digital transformation.”

“Lastly, I am pleased that during the first quarter of 2019 we successfully concluded the institutional public offering of our NIS 300 million Series C secured debentures listed for trading only on the Tel-Aviv Stock Exchange. These funds will serve to support our M&A strategy mainly in supporting the growth of our currently privately held subsidiaries and to improving our equity to debt structure.”

This press release presents, further below, certain stand-alone financial measures to reflect Formula’s stand-alone financial position in reference to its assets and liabilities as the parent company of the group. These financial measures are prepared consistent with the accounting principles applied in the consolidated financial statements of the group. Such measures include investments in subsidiaries and a jointly controlled entity measured at cost adjusted by Formula's share in the investees' accumulated undistributed earnings and other comprehensive income or loss.

[1] These non-GAAP measures are subject to the discussion under “Non-GAAP Financial Measures” in Sapiens’ press release issued on May 6, 2019 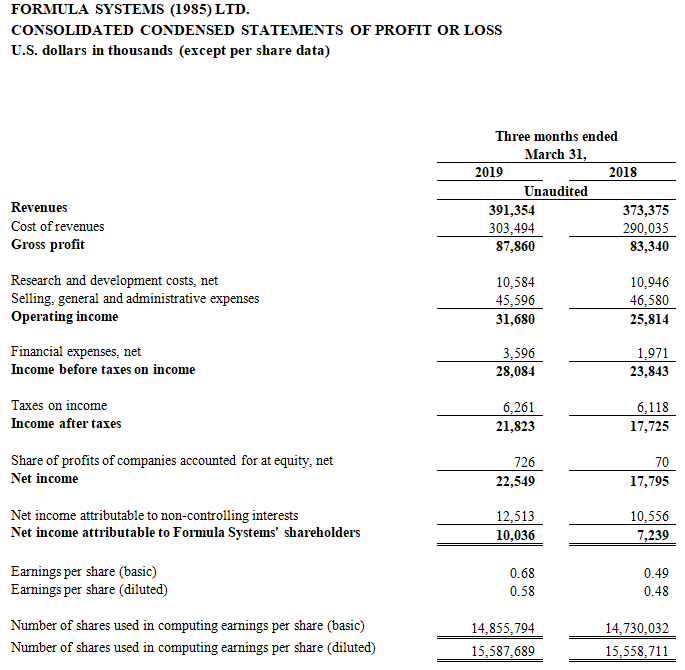 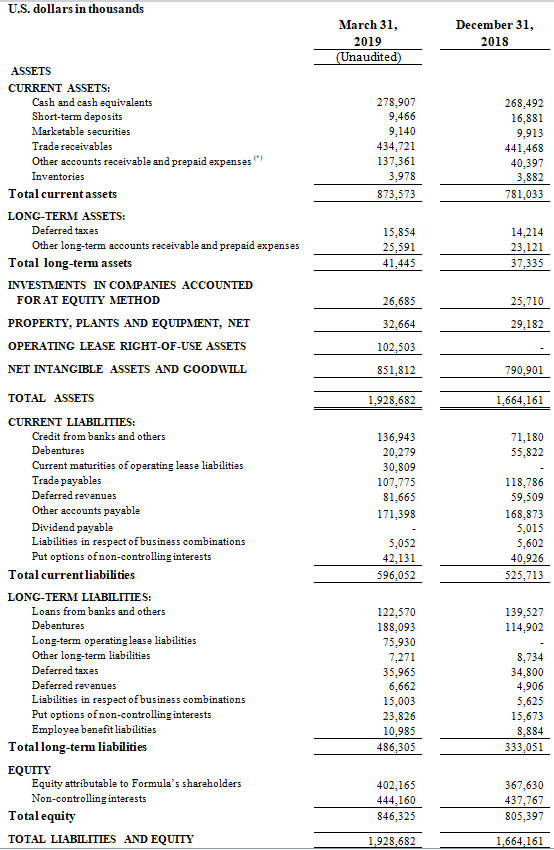 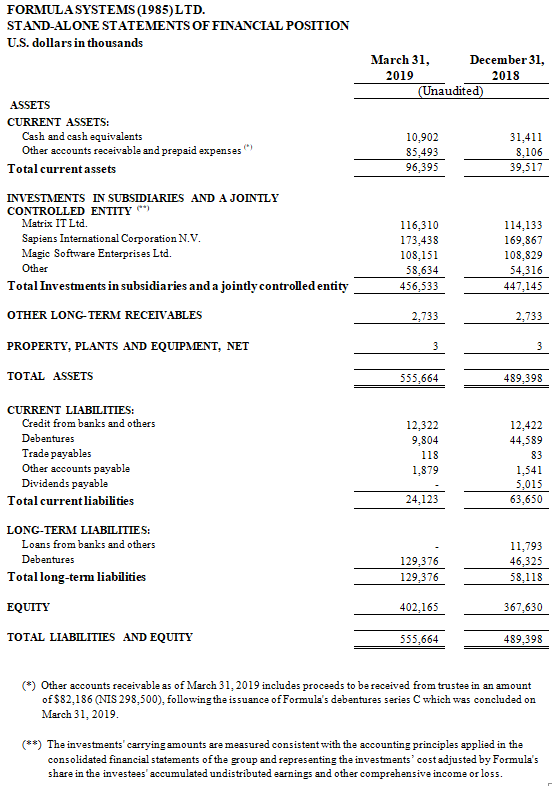