Formula Systems Reports the Results of the Fourth Quarter and Full Year 2018 with Record-Breaking Revenues of $1.5 Billion and Net Income Attributable to Shareholders of $32.2 Million for the Year

Commenting on the results, Guy Bernstein, CEO of Formula Systems, said, “We are very pleased to report our full year 2018 record breaking results with a strong finish reflecting continued growth in all major financial indices recorded across our entire investment portfolio.”

“With many changes taking place in the business arena in general and in the technology arena in particular, Matrix continues to adhere to its core values of innovation, professionalism, agility, stable management and transparency, which allow it to continue its growth, protect its position as a leader in the Israeli IT services market, and develop and improve its positioning in both the Israeli and the North-American markets by breaking into new fields.”

“Matrix continues its growth by providing strategic consulting to its customers, winning and managing projects and mega-projects and through mergers and acquisitions in both Israel and abroad.”

“I am very pleased with Matrix’s results for 2018 and that Matrix's operations in the US show prominent contribution to its growth, comprising approximately 12.1% of Matrix’s revenues for 2018 and 26.1% of its operating profit for the year.”

“Sapiens results reflect the expanding of its P&C businesses in key markets, such as EMEA, cost managing and aligning of R&D investments with its growth segments, winning new deals, acquiring companies, completing the integration of Stream and Adaptik operations (which accelerated the growth of its US P&C business), reaching meaningful headway in the L&A business and performing synergies and cost control.”

“I am pleased with Sapiens winning new business and earning increased industry recognition as a result of Sapiens expending its solutions and services offerings from both product development initiatives and acquisitions, as well as its continues collaborations with Insurtech groups which complement its core offerings.”

“Magic had a strong finish to 2018 with double-digit growth for the full year of 2018, powered by strong demand across its entire portfolio and throughout all of its regions. Magic enjoyed nine year consecutive all-time high annual revenues of $284 million and non-GAAP[2] operating income of $39.5 million for the full year of 2018, reflecting an increase of 10% and 12% year over year, respectively, driven primarily by organic growth. Magic expects its momentum to continue into 2019 due to its strong financial position, coupled with activity to promote and grow its markets performed during 2018”.

“Lastly, I am happy to conclude a successful year in Michpal, after the official launch of its new pension product and service line, "Michpal Pension" and "Michpal PensionPlus" in January 2018, which led to a 25% increase in revenues year over year.”

“Furthermore, during November 2018 Michpal expanded its business through the acquisition of an 80% share interest in Effective Solutions Ltd, an Israeli company that provides consulting services in the fields of operational cost savings and procurement, as well as salary control and monitoring. The two companies have launched, in November 2018, a new service called ‘Michpal YEDA’, adopted by more than 50% of Michpal's customers, which allows clients to consult with team of experienced professionals, including employment attorneys and HR experts, with respect to payroll, labor, pensions, social security and employee income tax matters.”

“The acquisition of Effective Solutions and the launch of Michpal YEDA are important steps in the execution of our growth strategy to expand Michpal’s market share by offering clients comprehensive and holistic solutions in the payroll software and services market encompassing payroll, labor laws, employee income taxes, pensions and provident funds – all under one rooftop.”

This press release presents, further below, certain stand-alone financial measures to reflect Formula’s stand-alone financial position in reference to its assets and liabilities as the parent company of the group. These financial measures are prepared consistent with the accounting principles applied in the consolidated financial statements of the group. Such measures include investments in subsidiaries and a jointly controlled entity measured at cost adjusted by Formula's share in the investees' accumulated undistributed earnings and other comprehensive income or loss.

[1] These non-GAAP measures are subject to the discussion under “Non-GAAP Financial Measures” in Sapiens’ press release issued on February 26, 2019

[2] These non-GAAP measures are subject to the discussion under “Non-GAAP Financial Measures” in Magic Software Enterprises’ press release issued on March 4, 2019 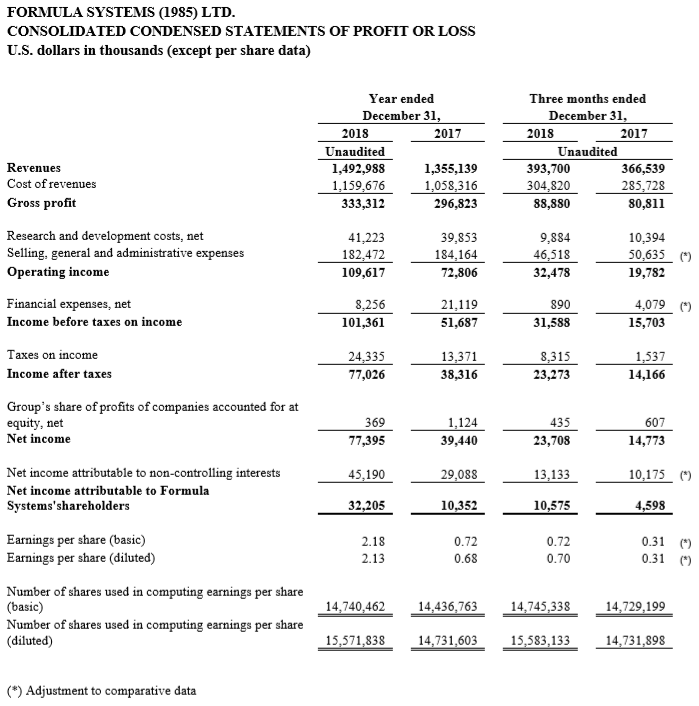 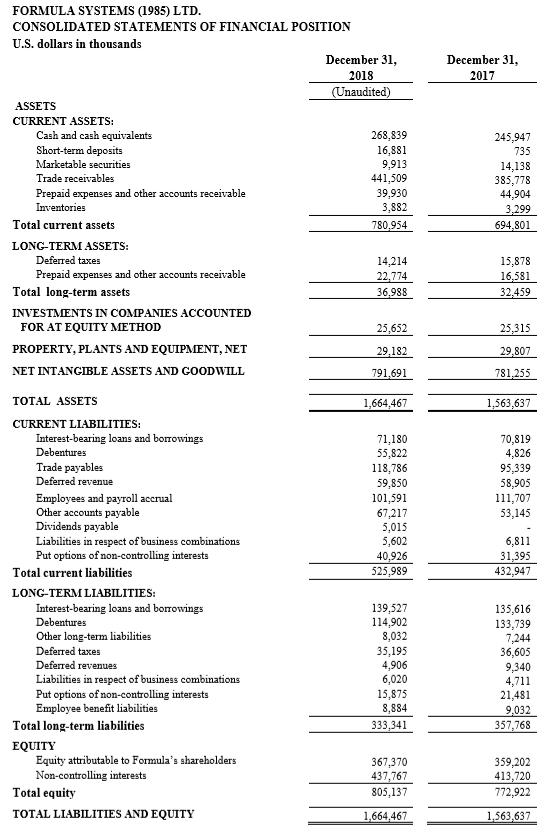 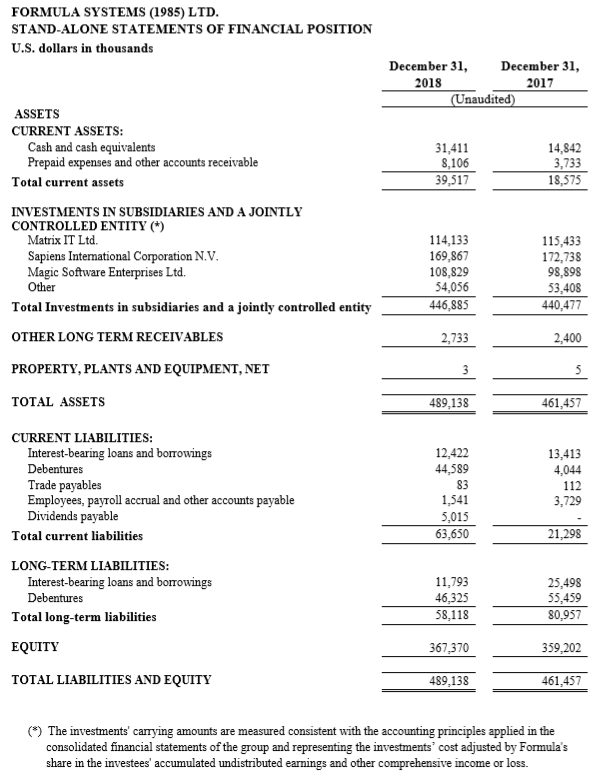