Commenting on the reults, Guy Bernstein, CEO of Formula Systems, said, “We are very pleased to report on continued growth momentum for the first nine months of 2018 in all major financial indices across our portfolio and look forward to ending the year with even more positive results.”

"In the first nine months of 2018, Matrix achieved solid growth across all its key financial indices, reporting revenues of NIS 2.3 billion (or $646 million), operating income of NIS 152.3 million (or $42.8 million) and net profit of NIS 100.2 million (or $28.2 million), in each case in the first nine months of 2018, reflecting increases of 10%, 7.3% and 15.8%, respectively, year over year. Matrix’s quarterly operating income reached NIS 50.1 million (or $13.8 million) in the third quarter, compared to NIS 52.3 million (or $14.7 million) in the same period last year, reflecting a decrease of 4.1% year over year mainly resulting from the Holidays of the Jewish month of Tishrei, which this year have entirely coincided with the third quarter (as opposed to being divided between the third and fourth quarters in the previous year).”

“Matrix continues its growth and employee recruitment momentum, as a result of winning new projects, including mega-projects, entering new fields, and accomplishing strategic mergers and acquisitions in Israel and in the US in synergetic areas of activity.”

“I am very pleased that Matrix's operations in the US show impressive growth in revenues and profitability, with about 13% of the revenues and 26% of the operating income for the third quarter coming from the US market.”

“In the third quarter, Sapiens’ revenues totaled $73.2 million, up 1.7% compared to last year, and its operating income increased by 51.7% year over year to $6.8 million, with operating margin of 9.3% compared to 6.2% in the same period last year. In non-GAAP[1]  terms, Sapiens’ operating margin was 14.0% during the third quarter, up from 12.4% year over year. These results reflect Sapiens’ significant strides to getting back on track, with new customer wins, enhancing new product development and effectively leveraging its global assets.”

“Sapiens expanded its P&C business in the EMEA and North American markets, while continuing to improve its operational performance. As a result, in the third quarter, Sapiens achieved a 160-basis point increase in non-GAAP operating margin year-over-year and grew its North America business by 12%.”

“To extend its competitive edge, Sapiens is partnering with InsurTech and FinTech start-ups to complement its core offering.”

“Magic’s record-breaking financial results for the third quarter and first nine months of 2018 reflect the solid demand for its software solutions and professional services, which serve to help its customers on their digital transformation journey. The third quarter revenues were $72.1 million, operating income was $7.7 million and non-GAAP[2] operating income was $10.0 million, up 10%, 9% and 10% respectively, year over year, driven exclusively by organic growth.

“Magic closed during the third quarter of 2018 a private placement of $35 million (including $9.2 million invested by Formula), a strong testament of its investors’ continued confidence in the company. Magic intends to utilize such funds to continue growing organically and through mergers and acquisition.”

“Lastly, during November 2018 Michpal expanded its business through the acquisition of an 80% share interest in Effective Solutions Ltd, an Israeli company that provides consulting services in the fields of operational cost savings and procurement, as well as salary control and monitoring. The two companies have launched a new service called ‘Michpal YEDA’, which allows clients to consult with team of experienced professionals, including employment attorneys and HR experts, with respect to payroll, labor, pensions, social security and employee income tax matters”.

“The acquisition of Effective Solutions and the launch of Michpal YEDA are important steps in the execution of our growth strategy to expand Michpal’s market share by offering clients comprehensive and holistic solutions in the payroll software and services market encompassing payroll, labor laws, employee income taxes, pensions and provident funds – all under one rooftop.”

This press release presents, further below, certain stand-alone financial measures to reflect Formula’s stand-alone financial position in reference to its assets and liabilities as the parent company of the group. These financial measures are prepared consistent with the accounting principles applied in the consolidated financial statements of the group. Such measures include investments in subsidiaries and affiliated company measured at cost adjusted by Formula's share in the investees' accumulated undistributed earnings and other comprehensive income or loss.

[1] These non-GAAP measures are subject to the discussion under “Non-GAAP Financial Measures” in Sapiens’ press release issued on November 7, 2018

[2] These non-GAAP measures are subject to the discussion under “Non-GAAP Financial Measures” in Magic Software Enterprises’ press release issued on November 13, 2018 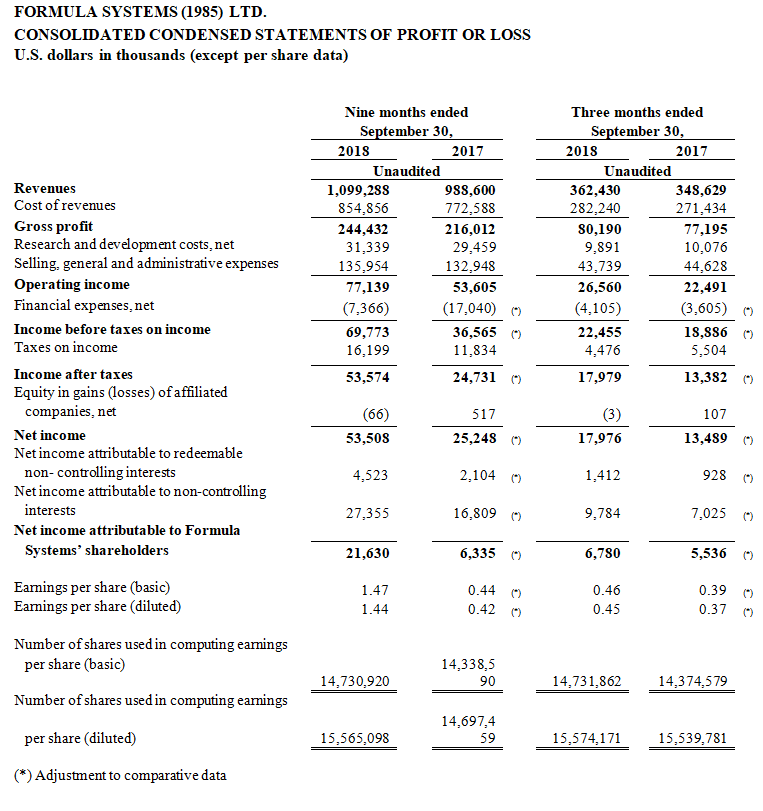 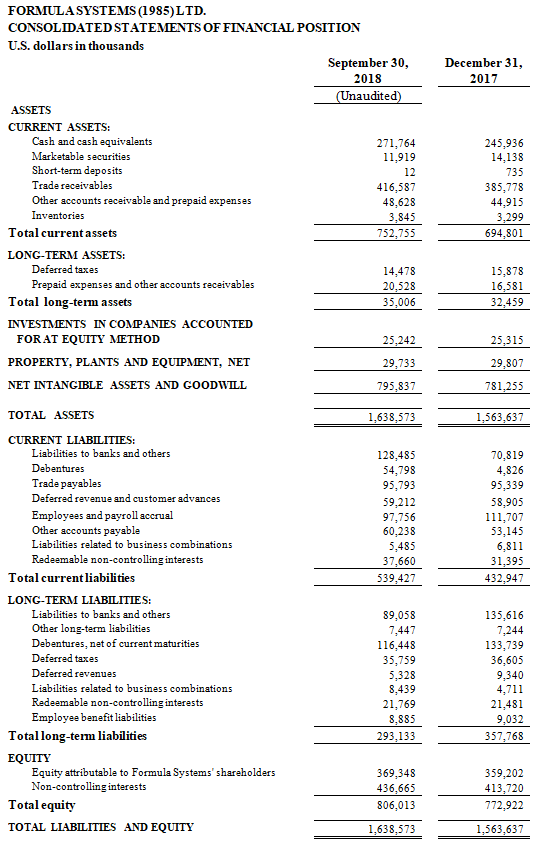 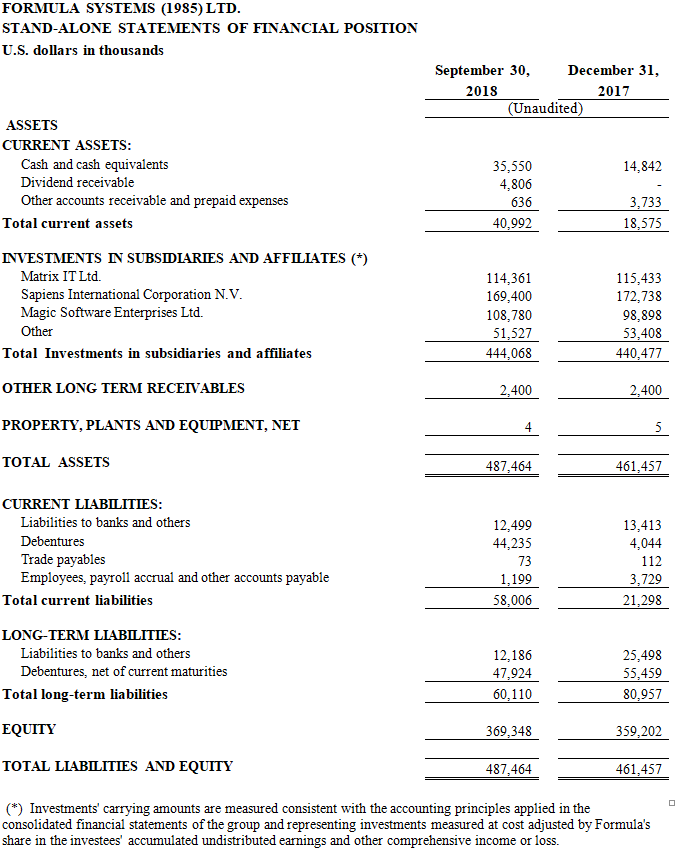