During 2003 our subsidiary Matrix completed the merger with its subsidiaries New Applicom, Sivan and Sintec and acquired new business while disposing of low margin operations, all part of its merger plan. These efforts resulted in a substantial increase in gross margin and EBITDA.

During the first quarter of 2003 our subsidiary BluePhoenix Solutions (Nasdaq: BPHX - News) completed the merger with Liraz Systems. The combination of the two companies created a company with a global presence, highly regarded technology and extensive business expertise.

In the first quarter of 2003 we started consolidating the results of our subsidiary Sapiens International (Nasdaq and TASE: SPNS).

In the fourth quarter of 2003 we raised capital in the amount of approximately $12 million.

In the first quarter of 2004 Formula acquired 59% of Formula Vision Technologies (F.V.T) ordinary shares by way of private placement.

"As stated at the beginning of fiscal year 2003 we devoted the year to working very closely with the managements of our subsidiaries to ensure the regain of positive EBIDTA and return to growth patterns" said Gad Goldstein, President of Formula. "We were able to build large and self-contained subsidiaries such as Matrix and BluePhoenix through a series of internal mergers and external acquisitions. We concluded the acquisition of Sapiens and its redirection into the insurance software arena. Our subsidiary Magic launched a new and exiting product iBOLT which we believe is going to lead Magic to rapid growth and improved profitability and we were able to increase the revenues of our privately held subsidiary nextSource by 200% from the previous year.

Achieving these goals has created solid ground that can sustain more growth and profitability as already demonstrated in the fourth quarter results. Based on the encouraging results of the fourth quarter and the expected consolidation of Formula Vision with its exciting offspring portfolio we have set our initial goals for 2004 of revenues exceeding $430 million and a substantial additional improvement in net profit."

The company will hold a conference call with the investment community today February 18th, at 10:00 (EST) to discuss the financial results, business highlights and outlook. Conference call details:

Statements made in this press release that are not historical facts are forward-looking statements. Such statements involve various risks that may cause actual results to differ materially. These risks and uncertainties include, but are not limited to: market demand for the company's products, dependence on strategic partners, integration of new business, successful implementation of Formula's products, economic and competitive factors, international market conditions, management of growth, technological developments, the ability to finance operations and other factors which are detailed in Formula's Securities and Exchange Commission filings, including its most recent report on Form 20-F. Formula undertakes no obligation to publicly release any revision to any forward-looking statement 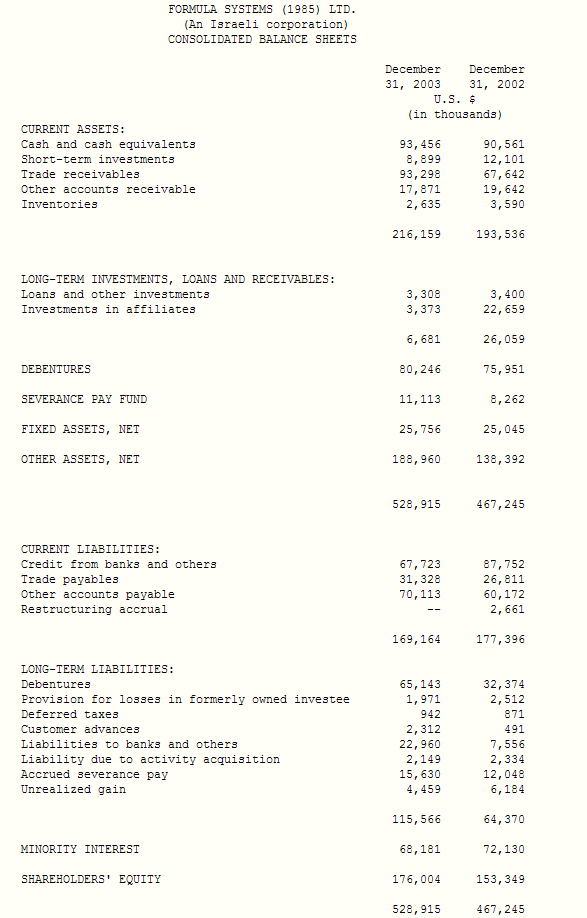 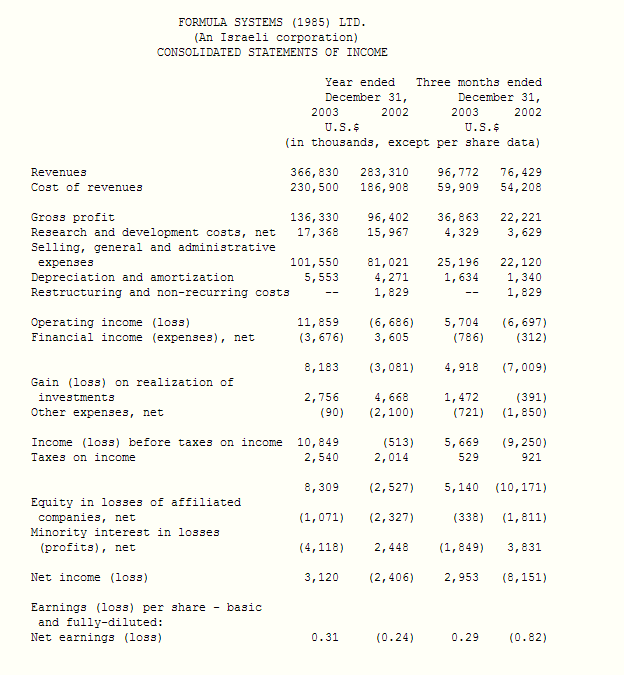